Third Series: The First Pillar of Petrochemicals: Methane (1 of 10)

In this article and next articles, we will discuss Pillar # 1 representing one of the basic building blocks of the petrochemicals/ chemicals industry. The discussion will include the sources, derivatives, manufacturing processes, and end-products and applications. These derivative products can be used in some cases directly in various consumer goods and/or as intermediates for further chemical and physical modification to yield consumer products.

Sources Natural gas is generally a mixture of gaseous minerals containing both organic and non-inorganic gases that are found in subsurface rock reservoirs. Methane occurs as the principal constituent of natural gas and is often produced by separation from the other constituents of natural gas. As mentioned earlier in previous chapter, the primary sources of Methane include natural gas from gas wells and associated gas from oil wells. In he former one, Methane represents the major component (greater than 90% by volume).

Derivatives Methane is widely used as a starting material for manufacturing a variety of chemical products. It should be noted that for most processes, it is not required to isolate and purify the methane, but the natural gas received as sales gas (containing over 90% by volume) from a gas/oil plant can be used as it will be seen in this series of articles.

Synthesis gas (commonly called syngas) is a mixture of carbon monoxide (CO) and hydrogen (H2) that is produced from the reaction of a carbonaceous material (i.e. containing carbon) that can be as solid feed (coal, coke, or lignite) or hydrocarbon feed (natural gas, naphtha, crude oi…etc) with steam as shown below. Generally, a gasifier is used for the gasification of solid feed.

C + H2O → CO + H2 For the purpose of the following discussion, the  the syngas production from the natural (or Methane) is considered. Synthesis gas (syngas) is considered the most important intermediate product resulting from Methane by steam reforming or autothermal (ATR) processes. The majority of the chemical derivatives from Methane are manufactured through syngas production step. There are however some derivatives can be produced by direct conversion of Methane.

Prior discussing the derivatives resulting from syngas, the following gives a brief background of the different types of chemical processes used for producing this essential intermediate material (syngas) of the petrochemicals/ chemicals industry.

Synthesis gas (syngas) is produced by steam reforming of natural gas (Methane) as shown in the following reaction:

Synthesis gas (syngas) can also be produced using autothermal (ATR) process. In this process, a hydrocarbon feed (such as naphtha, natural gas, residue oil) is oxidized by oxygen to form syngas. If the natural gas (Methane) is used, the following reaction results:

Oxygen is supplied either by on-site air separation plant or via a pipeline from adjacent air-separation plant. Purified nitrogen from this plant may be also used as the nitrogen source for the ammonia plant (see below).

In most cases, the composition of the syngas generated by the reforming section can be adjusted by further processing steps prior using it as a raw material for the other derivatives. PSA or membrane systems or methanator are commonly used for this purpose. Pure Hydrogen can also be produced using these systems (PSA is most common).

Since the natural gas usually contains hydrogen sulfide, proper treatment systems (e.g. desulfurization beds) are commonly installed upstream of the reforming (or POX) section. This is to protect the catalysts as well as to ensure sulfur-free syngas product. In some cases where the natural gas can contain high content of Nitrogen (over 1% by volume), a cold box (cryogenic) system is usually installed downstream the reformer section in order to remove Nitrogen from the syngas product.

Syngas is an essential intermediate product which is primarily used in the manufacture of methanol and ammonia. The preceding sections discuss the derivatives from Methane through syngas.

Ammonia Ammonia is the main basic raw material of the world nitrogen industry. It is produced in the anhydrous form (free of water) by a catalytic reaction between nitrogen and hydrogen. Nitrogen fertilizer consumption represents the major end-use of this derivative product. For more information, consult the table given below.

NOTE: Each Table is named to the derivative in which it is derived from. This will be used in this article and next series of articles. 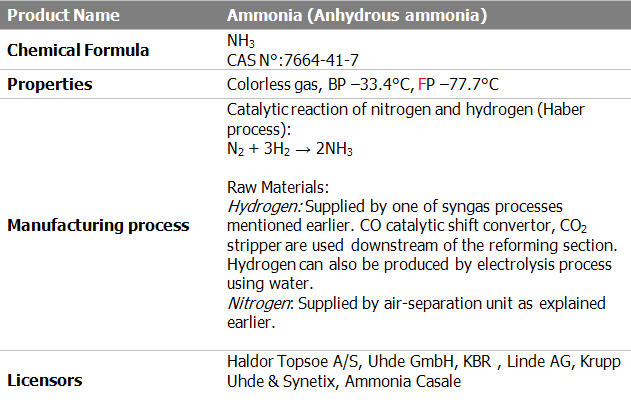 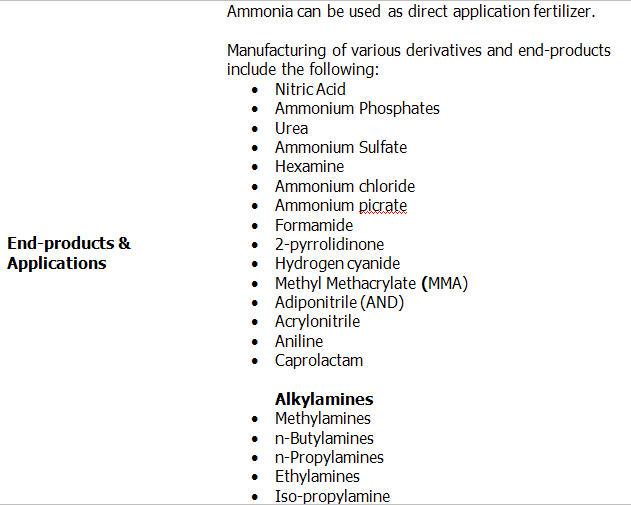 The following tables give more information about the ammonia-based derivatives listed in previous table. 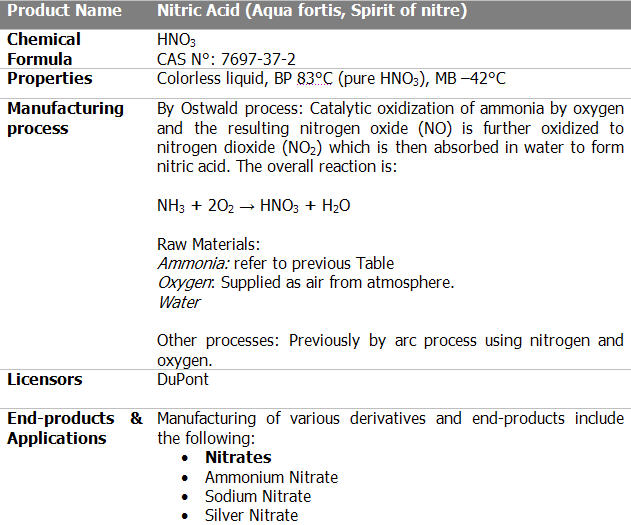 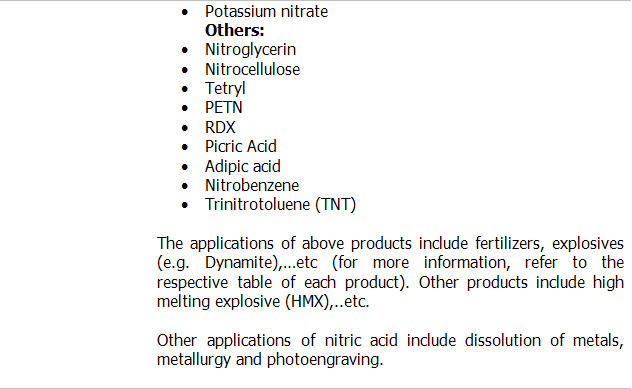 Nitrates: Nitric acid is a main as precursor for nitrates production used for fertilizers and other applications. Some of the important inorganic nitrates are ammonium nitrate, sodium nitrate, silver nitrate and potassium nitrate. The following tables give of these products derived from nitric acid. Ammonium Nitrate 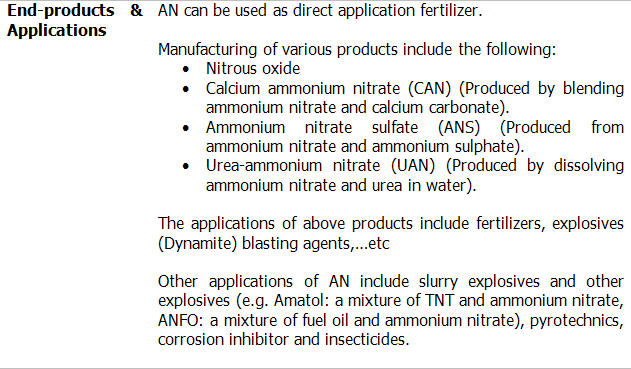 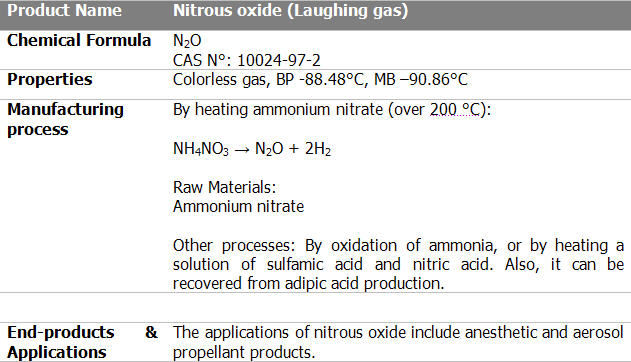 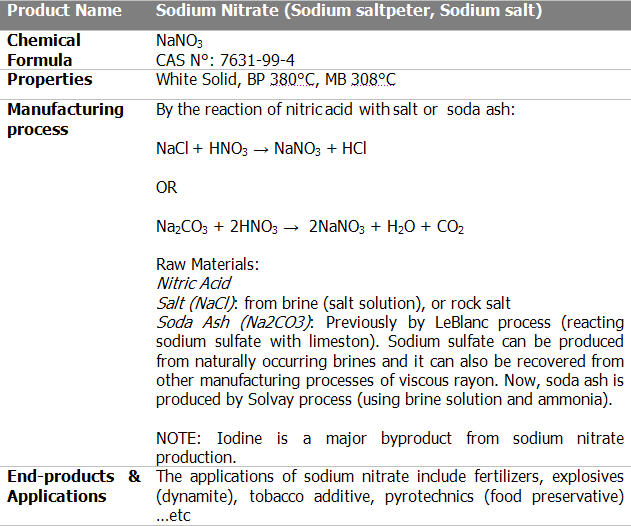 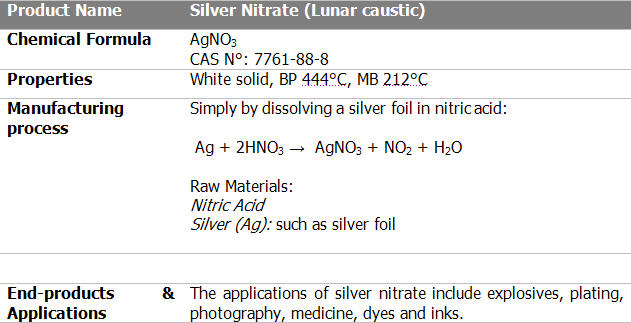 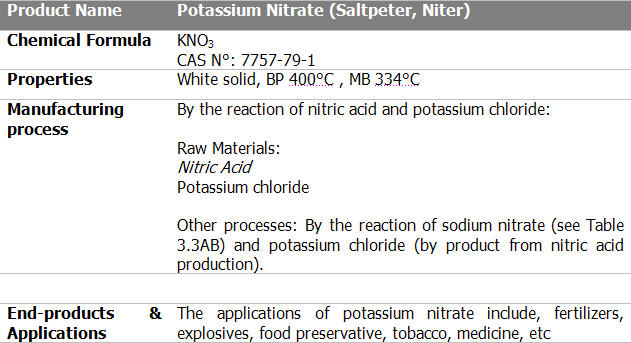 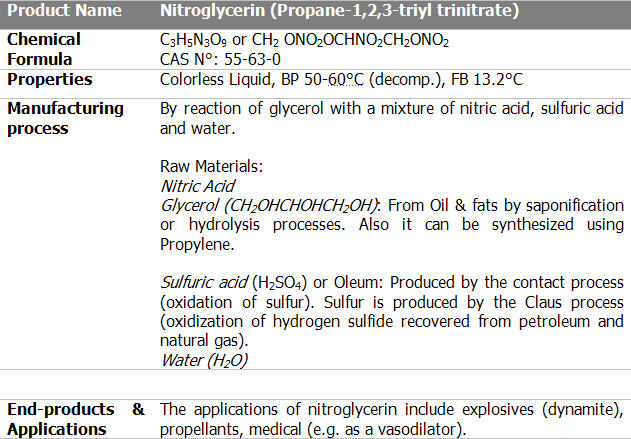 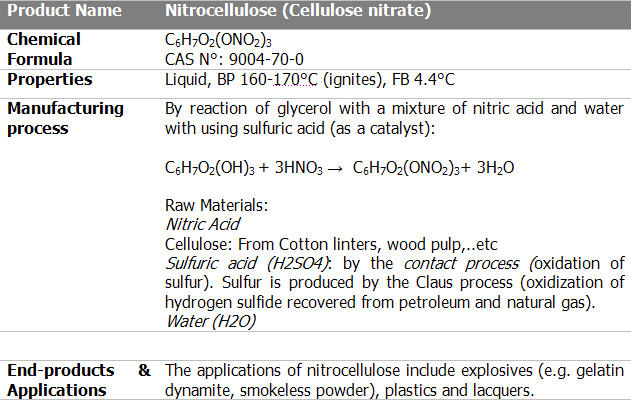